Home » Harry Potter and the fate of the European barn owl

Harry Potter and the fate of the European barn owl

Category:
Pilot project
Acronym:
Tyto
Coordinator:
Erik Verheyen (RBINS)
JEMU partner:
JEMU team
Project summary:
INTRO: The barn owl (Tyto alba) population in Belgium consisted of only a few brooding pairs 40 years ago. The “Kerkuilwerkgroep”, a group of highly engaged citizens, conducted a tremendous effort to protect the barn owl population. As a result, the population of barn owls in Flanders has grown substantially, containing an estimated 2250 birds today. A shift in coloration of the owls has been noticed: while owls used to be exclusively dark, birds encountered today are more and more white coloured with ca 10% of the birds being even completely white. Plumage coloration and spottiness are genetically determined (Roulin and Dijkstra, 2003) and can result from local adaptation to habitat choice (wood vs areal habitat) (Dreiss et al., 2012). However, the change in color may also result from breeding with non-european birds: amongst the road casualties, more and more barn owls are encountered from captivity which may be linked to the Harry Potter hype. The barn owls of Harry Potter and his friends play a prominent role in the movies, which have led to a huge commercial breeding trade of barn owls from around the globe. Unfortunately, many bred owls are released when owners realise that they are not the most easy pet to keep. The number of released birds in Flanders since 2000 ranges from 850 – 1700 birds. Although only a fraction of these birds survive in the wild, their impact on the genetic diversity of the resident population may be substantial. OBJECTIVE: In the current project, we aim to characterize the genetic diversity of the current Tyto alba population in Belgium and compare this to the genetic diversity from before the Harry Potter hype. This comparison will highlight whether/how much genetic material from foreign subspecies has entered our local population. METHOD: As a first approach, we applied a ddRAD ('double digest Restriction Associated DNA') sequencing protocol to assess genetic variation in museum specimens of varying age and levels of DNA degradation (Peterson et al. 2012; Vaudo et al. 2018). This NGS technology uses two restriction enzymes (‘double digest’) to cut the genome in thousands of small pieces of which the outer ends are being sequenced. In this first pilot test, we process 28 museum specimens of the barn owl (Tyto alba), a species suggested to have endured recent introgression events from encounters with exotic non-European Tyto species. Contrasting the genetic archive of historical and contemporary collections could hold the key to gain unprecedented insights into these matters.
Collaborations:
Ludo Smets en Isabel Lemahieu (Kerkuilenwerkgroep Vlaanderen) Sofie Derycke (ILVO) Alexandre Roulin, Vera Uva and Tomasz Suchan (University of Lausanne, Switzerland) Sylvain Antoniazza (Swiss ornithological institute)
Lab work progress:
In progress. Adjustment of the hyRAD protocol
Starting date:
2018
Project status:
In progress 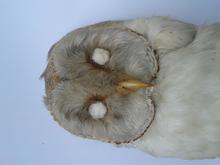