Category:
Pilot project
Acronym:
Andant
Coordinator:
Maurice Leponce (RBINS)
JEMU partner:
Zoltán T. Nagy, Gontran Sonet
Project summary:
We propose here to conduct a pilot study to set up and calibrate the use of DNA barcodes to discriminate ant species collected during a large-scale ant inventory at the EDIT ATBI+M(1) site in the Ecuadorian Andes. A usual problem when studying tropical leaf-litter ant assemblages is that the more common genera collected (Solenopsis and Pheidole) are also among the most difficult to identify to species level. A correct determination is particularly critical for biogeographical and ecological studies attempting to define species distributions and the factors that determine them. A molecular approach should improve species determination and bring useful information’s on the isolation or restricted dispersal of some species. It should also provide a powerful tool to match castes from the same species. We propose to work on 3 test assemblages collected at 1000, 2000 and 3000m a.s.l. and to follow a five-step programme: (1) start with one of the genus abundant but difficult to sort morphologically (Solenopsis); (2) for comparison purposes, barcode an invasive species already available in the library of the recent Formicidae barcode of Life project (Wassmannia auropunctata); (3) barcode possibly cryptic species collected at two altitudes; (4) barcode a second genus abundant and difficult to identify and which contains polymorphic species (Pheidole); (5) barcode all species from a single test assemblage (at 1000m) and evaluate what additional information would be needed to infer its phylogenetic structure. The total number of specimens to process is estimated to be around 400. The perspective is to analyse the phylogenetic structure of ant communities in a biodiversity hotspot where we suspect to encounter distinct species assemblages at small geographic scale. This phylogenetic approach would add an evolutionary dimension to the interpretation of the ant community structure. This project complements other on-going projects: the Formicidae barcode of Life, the Arthropod Monitoring Programme of the Smithsonian Center for Tropical Forest Science, a Belspo Action 1, a PhD thesis and an on-line interactive database developed in collaboration with the Belgian Biodiversity Platform.
Collaborations:
Justine Jacquemin (ULB), Thibaut Delsinne (RBINS & ULB), Nina Wouters (RBINS & ULB)
Lab work progress:
Completed
Data analysis:
Completed
Starting date:
2010
Project status:
Completed 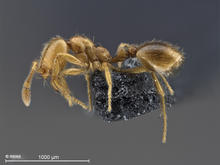