Category:
Pilot project
Acronym:
CRYOLI
Coordinator:
Patrick Martin (RBINS)
JEMU partner:
Gontran Sonet (RBINS) & Nathalie Smitz (RMCA)
Project summary:
This project addresses the issue of cryptic diversity in oligochaetes of ground waters and Lake Baikal, two environments that can be considered as “extreme”. It focuses on two characteristic faunistic elements of the freshwater oligochaetes communities, the species flock Baikalodrilus in Lake Baikal, and the genus Trichodrilus in the underground. COI data was already obtained. However, as a mitochondrial single-locus approach can be problematic for the accurate delimitation of species, a combined approach including nuclear genes is compulsory. The main aim of this project is to explore additional genetic markers commonly used in molecular taxonomy of aquatic oligochaetes. The project will require the setting up of protocols for sequencing these gene fragments from material existing in RBINS annelid collection and the optimization of the protocol for some material existing in the form of Chelex extracts (although some ethanol-preserved material is still available). Beside pure scientific outputs, the project will (1) contribute to develop a protocol for working with DNA of specimens of high value, extracted according to a widely used method a decade ago, an issue of concern for many archival specimens, (2) offer the opportunity to valorise valuable COI data already obtained for both genera considered, and (3) lead to the publication of two papers at the mid-term.
Collaborations:
Svante Martinsson, PhD Student, Department of Biologiacal and Enviromental Sciences, University of Gothenburg
Lab work progress:
Completed
Data analysis:
Completed
Starting date:
2015
Project status:
Baikalodrilus part Completed, Trichodrilus part paused 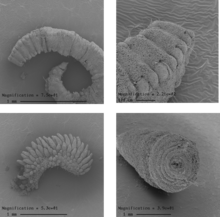 Abstract presented at the 7th International Barcode of Life Conference: